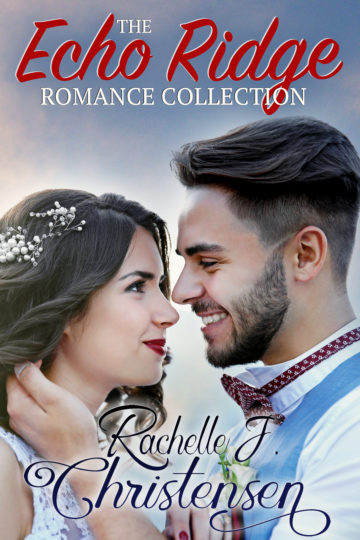 ebook Available HereAudiobook Available Here
Come back to Echo Ridge and delight in 4 contemporary romances from Award-winning and Bestselling author Rachelle J. Christensen! Each heartwarming, inspirational story is set in beautiful upstate New York. This box set includes bonus epilogues and a sneak peek of Rachelle’s new book! Savor a recipe with each of the stories and come back for more.

As the head librarian of the Echo Ridge Library, Britta Klein thrives on order and categorization. Unfortunately, the old church-turned-library is in desperate need of a renovation. The Harvest Hurrah fundraiser seems to be the answer, but plans keep going awry. With help from Milo Geissler, accomplished musician, piano tuner, and kiss thief, each catastrophe is narrowly avoided. When Milo goes to great lengths to help Britta find a key classic book, she begins to wonder if there is more to life than books and order. Can she allow this man who speaks the language of music to tune her heart to a new song?
Welcome to Echo Ridge, New York where romance finds its way into the hearts and lives of the people who walk the streets of the close-knit community.
NOTE TO READER: THIS VERSION of The Kiss Thief contains a BONUS EPILOGUE!

THE PRINCESS BRIDE OF RIODAN

When a mysterious man offers to help Elise redecorate the old Bed & Breakfast, she gladly hands him a wallpaper steamer. After she discovers his true identity, she doesn’t know whether to curtsy or run and hide. Unfortunately, hiding isn’t an option because her heart is already tangled up with the handsome prince. At the same time, Elise’s old crush from high school wants a relationship and she’s forced to decide whether to chase after a fairy tale ending or stay grounded in reality.

Do you remember your first love? Have you ever wondered what would happen if you had a second chance to follow your heart?

When Laney Richins left Echo Ridge, New York eight years ago, she vowed she’d never return, but life had other plans. Those plans included her cute little boy and a divorce, so Laney moved back home and started over. Working in the flower shop seems like the perfect plan until Billy Redford, the man she should have married shows up.

Billy Redford’s heart was broken when his high school sweetheart turned her back on him and fled Echo Ridge for the big city lights. Running into Laney in Echo Ridge now brings up past feelings he thought were long gone. She’s prettier than ever, still seems to read his mind, and despite his protests ends up on the building and decorating committee with him for the Homecoming dance. Billy knows how to build just about anything, but he isn’t sure he knows how to mend a broken heart.