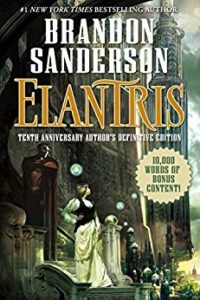 Elantris is a 5-star book and was the debut book by now famous author, Brandon Sanderson. I was privileged enough to purchase this book at the Children’s Writer’s and Illustrator’s BYU Writer’s Conference and to have it signed by Sanderson–a first edition hardcover!

The story of Elantris is incredible with layer upon layer of the most delicious detailed plot I’ve seen for a while. I think I could easily compare it to the delectable layers of a rich German chocolate cake, (at least the way I’ve learned to make it from my mother-in-law) that my husband devours because that’s what I did from the first few pages of this book. I devoured it and enjoyed every bite!
I tried to think of a way to share what this book was about without giving away any details, but this is all I could come up with because the mystery of Elantris is so finely woven into all the details of this book.

Elantris is a fantasy novel about Prince Raoden and the mysterious “fallen” Elantrians. Elantris used to be the city of the Gods filled with all kinds of magical power, but ten years ago the city fell. Lady Sarene is engaged to marry Prince Raoden and arrives in Arelon to disappointing and confusing news. Is her Prince really dead? And is the zealot missionary really out to cause problems?

Brandon Sanderson is a genius and I hope that many of you will have the opportunity to read this book. In the fantasy novel Elantris, Sanderson creates a world so real that you will feel you have actually visited it. He even has different religions and languages so masterfully woven into the story that after reading the book, I kept wanting to say “Kolo?” when I was talking to my husband. The best way to describe “Kolo” is to compare it to how the Canadians say, “Eh or Hey,” to end many of their sentences or how American’s say, “ya know.” It’s funny, ya know, but I loved the character, Galladon, who always said “Kolo?”

Which brings me to another point about the quality of Elantris—Sanderson created several characters whom readers are able to know intimately. They aren’t just the stand-up cardboard, fill-in the blank kinds you’ll find in many novels or the lame sidekick. They were real, living breathing people—at least they seemed to call to me from the pages when I should’ve been sleeping. But since I was up taking care of my newborn and couldn’t be sleeping, why not read, right?

Here’s the first line from the book, just try to tell me you wouldn’t keep reading!

“PRINCE Raoden of Arelon awoke early that morning, completely unaware that he had been damned for all eternity.”

My only complaint and this would be for pretty much any fantasy writer is that I wish they would include a pronunciation guide for all of the names and words they choose to invent for their books. I know I’m weird but I like to know that I’m “saying” the name right when I’m reading the book.

Elantris was the capital of Arelon: gigantic, beautiful, literally radiant, filled with benevolent beings who used their powerful magical abilities for the benefit of all. Yet each of these demigods was once an ordinary person until touched by the mysterious transforming power of the Shaod. Ten years ago, without warning, the magic failed. Elantrians became wizened, leper-like, powerless creatures, and Elantris itself dark, filthy, and crumbling.

Arelon’s new capital, Kae, crouches in the shadow of Elantris. Princess Sarene of Teod arrives for a marriage of state with Crown Prince Raoden, hoping — based on their correspondence — to also find love. She finds instead that Raoden has died and she is considered his widow. Both Teod and Arelon are under threat as the last remaining holdouts against the imperial ambitions of the ruthless religious fanatics of Fjordell. So Sarene decides to use her new status to counter the machinations of Hrathen, a Fjordell high priest who has come to Kae to convert Arelon and claim it for his emperor and his god.

But neither Sarene nor Hrathen suspect the truth about Prince Raoden. Stricken by the same curse that ruined Elantris, Raoden was secretly exiled by his father to the dark city. His struggle to help the wretches trapped there begins a series of events that will bring hope to Arelon, and perhaps reveal the secret of Elantris itself.

A rare epic fantasy that doesn’t recycle the classics and that is a complete and satisfying story in one volume, Elantris is fleet and fun, full of surprises and characters to care about. It’s also the wonderful debut of a welcome new star in the constellation of fantasy. 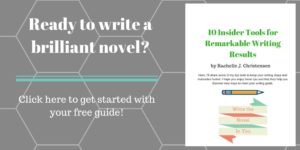