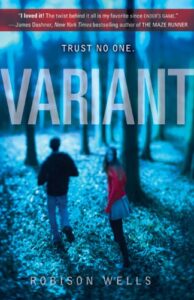 Variant won the Best Youth Fiction – Speculative award for the 2011 Whitney Awards and it won for good reason.

Holy wow! It was awesome and I loved the twist at the end. I didn’t love that the author left me on a big cliffhanger at the end–you mean, mean author, you–making me wait until I could get my hands on the next book! Seriously, though, Wells does a great job of creating realistic teenage characters with a unique and complex set of problems.

Benson Fisher thought that a scholarship to Maxfield Academy would be the ticket out of his dead-end life.

Now he’s trapped in a school that’s surrounded by a razor-wire fence. A school where video cameras monitor his every move. Where there are no adults. Where the kids have split into groups in order to survive.

Where breaking the rules equals death.

But when Benson stumbles upon the school’s real secret, he realizes that playing by the rules could spell a fate worse than death, and that escape—his only real hope for survival—may be impossible. 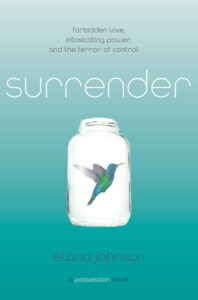 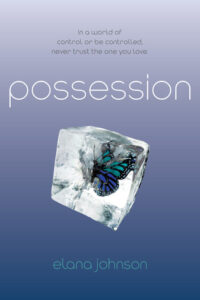 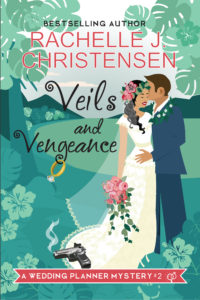 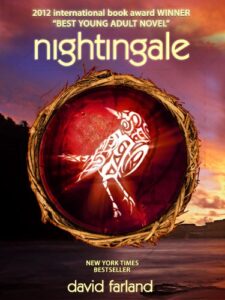 Elana Johnson is inspiring and her writing is fresh and quirky. The main character in Possession, Vi, has a sassy attitude that kept me smiling throughout the book as she took on whatever came her way.

This book has heavy leanings to Science Fiction with its amazing mind-reading and mind-control as well as hundreds of mind-blowing inventions. It was interesting to see the way Johnson connected each aspect of this mind-controlled society with the free-run of some of its citizens.

I love the cover of Possession and the tag line: Control or be controlled.

I had a bit of a hard time following the arc of Vi’s emotions. I mean, yes, she is a teenager and that should excuse pretty much any emotion, but at times it was hard to feel the authenticity when she went from sobbing to kicking butt in five seconds flat. The amount of crying Vi does, even considering her range of loss and trials, seems incongruous with the tough, smart fight she’s giving to anyone standing in her way.

I’m looking forward to finding out more about Vi’s world. Johnson did a great job of keeping the questions popping in my mind and I was eagerly turning pages to find the answers.

Vi knows the Rule: Girls don’t walk with boys, and they never even think about kissing them. But no one makes Vi want to break the Rules more than Zenn … and since the Thinkers have chosen him as Vi’s future match, how much trouble can one kiss cause? The Thinkers may have brainwashed the rest of the population, but Vi is determined to think for herself.

But the Thinkers are unusually persuasive, and they’re set on convincing Vi to become one of them … starting by brainwashing Zenn. Vi can’t leave Zenn in the Thinkers’ hands, but she’s wary of joining the rebellion, especially since that means teaming up with Jag. Jag is egotistical, charismatic, and dangerous—everything Zenn’s not. Vi can’t quite trust Jag and can’t quite resist him, but she also can’t give up on Zenn.

This is a game of control or be controlled. And Vi has no choice but to play. 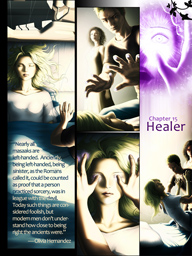 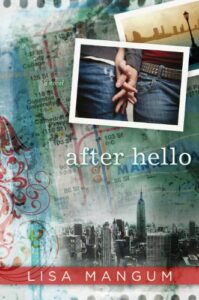 After Hello is a great book by Lisa Mangum. This is a unique kind of story, taking place during one day, as Sara and Sam make several connections with interesting people and learn important things about themselves. Mangum’s writing is flawless and beautiful. I love the intricate details Mangum gives her characters that make them come to life. This book moves at a slower pace as the reader is invited to walk alongside Sara and Sam and learn their inner secrets. The emotionally charged connections made ring true for the young adult audience and the book’s clean and subtle romance is beautifully done.

What if the first day of your relationship was the only day you had?

Seventeen-year-old Sara is a seeker. She’s always on the lookout for the perfect moment to capture with her ever-present, point-and-shoot camera, especially on her first trip to New York City.

Sam is a finder. He has a knack for finding what other people can’t—a first-edition book or the last two tickets to a sold-out Broadway show. In New York, there is always something interesting to find.

When Sam and Sara’s paths cross, neither one of them is prepared for what they will find out about each other—and about themselves when they form an unlikely partnership in search of an elusive work of art. They have one day to find the impossible. Fate brought their talents together, but what happens when time runs out? Will love be able to overcome fate? This new novel from award-winning author Lisa Mangum explores what happens after hello. 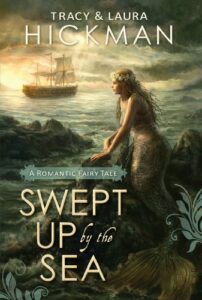 Here’s another book that was on my reading list. Swept Up by the Sea by Tracy and Laura Hickman has a fabulous cover that hints at the part-fantasy, part-humor, part-adventure that makes up this tale. I’m currently reading this book and it’s not in my usual genre–meaning it’s over-the-top silly with a fun narrator but intertwined with a great setting that pulls you into the story. If you liked reading The Princess Bride, then you will probably enjoy this book.

Determined to seek his fortune, Percival Taylor leaves behind his sleepy hometown and sets out to become a legendary pirate—only no one at the roguish seaport of Blackshore will allow him any- where near a ship!

Percival must find other means to win the heart of the beautiful Tuppence Magrathia-Paddock, who has mistaken him for a pirate rogue out of one of her romantic tales. She is entirely willing to swoon into his arms if he can prove his buccaneer soul—and she is willing to arrange her own kidnapping to prove it.

Percival eventually finds himself captain of a broken-down ship, complete with a crew of pirates who make their living selling fake treasure maps, a jilted fiancee, a reclusive Master Shipwright, and an old professor with a secret that could kill them all. It’s Pirates of Penzance meets Princess Bride as this motley group of characters sets sail for treasure and romance.