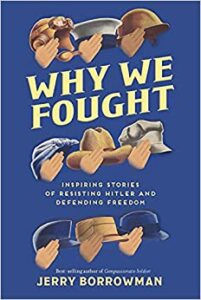 Why We Fought was a fascinating collection of true stories about people who helped fight the war in very different ways. I was excited about utilizing this book as an addition to my homeschool collection. The book appeals to a broad audience, both young and old. I saw this as several members of my family picked up the book and read a story including Grandpa and my teenage son.

I enjoyed reading about the unknown “Ghost Army” during WWII that helped save an estimated 30,000 lives through decoys, deception, double agents, and more war tactics. I liked how Borrowman took ancient history to show how similar war tactics are still used today. For example, the Trojan horse of Greek mythology was illustrated as deception used to win a war and then a recounting of General George Washington’s careful maneuvers to trick the British helped in the war for Independence. This all tied together as we read about how the US created a “fake” army of rubber tanks and phony artillery to fool Germans.

An excellent read for history lovers and students alike!

Some were soldiers like the Ghost Army, an eclectic group of former artists, actors, and engineers who engaged in top-secret tactical deceptions by staging ingenious decoy armies. Using inflatable tanks, radio transmissions, and sound effects, they were able to trick the Germans throughout the course of the war, often working close to the front lines of the fiercest fighting.

Some were ordinary citizens like William Sebold, a German immigrant and US citizen, who could have been a deadly foe, but instead chose the Allied cause. When he was coerced by the Gestapo into becoming a spy in America, he instead approached the FBI and offered to become a double agent. His efforts successfully helped bring down a dangerous German spy network that was dedicated to stealing industrial and wartime secrets and sabotaging America on home soil.

These dramatic and inspiring personal stories shed light on some of the darkest days of World War II and one of the most perilous times in human history. As the Nazis swept through Europe, citizens around the world faced an individual and national complex moral question: How do you respond to the tyranny and bloodthirsty madness of the Nazis? These are stories of ordinary men and women who would not surrender or compromise. They resisted and fought with total commitment for freedom and democracy despite the personal cost.