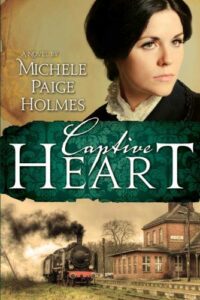 Captive Heart is more of a historical romance and I enjoyed the setting and Emma’s fiery spirit. Holmes’s writing draws you in and puts you right smack dab in the middle of mining country in the Black Hills. The romantic tension is great and the conclusion was pretty satisfying.

Emmalyne Madsen sends a desperate plea heavenward as a band of lawless men makes their way up the aisle of the railcar. When one hauls her roughly from the seat, threatening and cursing, Emmalyne fears her adventure out West has just turned into a nightmare.

Thayne Kendrich has an urgent need for a school teacher, and he’s not above doing whatever it takes to get one—including forcing her at gunpoint across the scorching prairie. But the teacher he chooses turns out to be a little tougher—and softer—than he anticipated, and before long he finds himself battling emotions he vowed to never feel again.

Emma, too, struggles with feelings she knows she ought not be having toward Thayne. He’s an outlaw, after all—or is he? As the days pass and their destination—the Black Hills—draws nearer, Emma realizes that out West, the line between right and wrong is sometimes blurred. Might the man she believed to be on the wrong side of the law have acted with the purest intentions? If so, her greatest danger may be in her own heart, as he holds her captive in more ways than one.