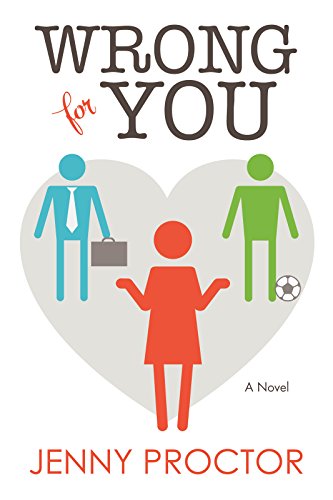 Wrong for You was the first book that I’ve ever read by Jenny Proctor and I was so impressed that I immediately bought another one to read next, which I will tell you about! I loved the witty voice of Lane and her relationship with her Grandma in this book. The scene where we first meet the Hamilton brothers is all kinds of fun and had me immediately invested in the story. This book is fun, light, clean, and humorous, yet it has depth at the same time–a hard feat to pull off in a rom com. I admired Lane’s qualities and those of the Hamilton brothers as well. Which one of the brothers was my favorite? You’ll have to read the book to see who Lane chooses because I agree with her heart!
Both of my daughters read this book immediately after I did and they both loved it just as much as I did!
Here’s more about the book:
Lane Bishop is a hardworking, intelligent, beautiful young woman. And with her recent move to Chapel Hill, she is determined to leave behind the drama and effort of keeping up with the dating scene. Even so, Lane somehow manages to get dragged out by a gaggle of girls to go watch boys play soccer. Just watching is not Lane’s forte, so she joins in the fun and leads her team to victory.
Rather than feeling intimidated by the vivacious beauty on the opposing team, Jamie Hamilton is intrigued. Risking his “untouchable” dating status, he decides to pursue Lane—with a little help from his older brother Simon. With Simon’s behind-the-scenes assistance, Jamie proves irresistible, even to a disillusioned dater like Lane. But as she gets to know both brothers, Lane can’t help but wonder—beneath the grand gestures and romantic words, is she falling for the wrong guy?

Other great clean reads you may enjoy: 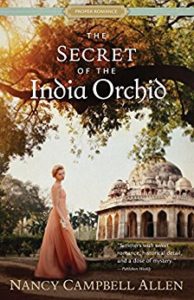 I enjoyed this book so much that I finished reading and already lent it out to my aunt! This book is part of the Proper Romance line which is a can’t miss grouping of books. This novel also has a wonderful mystery full of suspicions, clues, hints, and everything I love to keep me reading late into the night.

I loved the setting of this novel. Reading about India in a time where it was treated as almost a summer-home for the British was so interesting. The setup with Anthony Blake was well-done and I was rooting for him from the start. Sophia’s character is fresh, determined, and smart as she faces the mystery surrounding her heart, Anthony, and the deeper mystery involving murder and intrigue.
This is a satisfying read, a clean romance, and I look forward to more from Nancy Allen.

Here’s more about the book: The Secret of the India Orchid

Anthony Blake, the Earl of Wilshire, is in love with his best friend’s sister, Sophia Elliot. But his plans to court her are put on hold when he is forced to resume his role as an undercover spy for the Crown. A secret document listing the names of the entire network of British spies—including his own—has been stolen. To protect Sophia, Anthony cuts off all ties to her and exchanges his life as an honorable earl for the facade of a flirtatious playboy.
Heartbroken and confused, Sophia travels to India, hoping to find healing in one of the most exotic regions of the British Empire. But the exotic land isn’t as restful as she had hoped. Instead, she finds herself embroiled in a mystery of a missing sea captain, a possible murder, and a plot that could involve the prince of India. And when Anthony appears at the British Residency, asking questions and keeping his distance from her, she is stunned.
She still loves him, and, in her heart, she knows he loves her too. But how can she rebuild her relationship with him if he won’t confide in her? Does she dare offer her heart to him a second time, or will their love be lost under the India sun?
Other books you may enjoy: 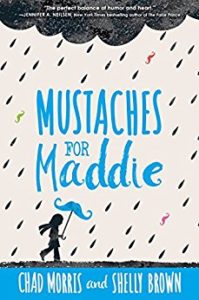 Chad Morris and Shelly  Brown have written a compelling story accented with humor, delight, and heart-wrenching experiences. I especially felt the emotion in Mustaches for Maddie because it’s based on a true story and I clearly remember when Maddie was in the hospital and it was too scary to want to think about, yet alone try to explain. That’s why I love this book–the authors have created a priceless masterpiece from their own experiences with their daughter, Maddie.

I laughed out loud several times, smiled plenty, and yes, even had to wipe some tears in a few places. I think this book is perfect for young readers because the pacing of the story is exactly in sync with how their wild imaginations and attention spans work. There is definitely a grounding truth in this story about how to deal with the desire to be “popular” and do what everyone else is doing and how to be who you are.

Kudos to Chad Morris and Shelly Brown for writing a book that entertains and inspires. If you have kids, grandkids, or friends, share this book with them today…and definitely a mustache!

There’s another really neat thing with this book: Compassion into action. There are stickers and postcard available to help teach children compassion and an incredible resource has been created.

Take a look at the readers guide: http://shdwmtn.co/MustachesforMaddieReadersGuide

Based on a true story.

Maddie is a normal twelve-year-old girl. Well, except for the fake mustaches she carries in her pocket. She likes to make people laugh and slapping on a mustache, especially a fuzzy pink or neon green one, always gets a smile. Maddie hopes that the class queen, Cassie, will find her mustaches as funny as she does and want to play with her at recess. She’s been self-conscious lately because her right arm only feels normal when it’s curled against her chest and she’s constantly tripping over her feet. But that’s probably just part of growing up and not something weird, right?

When Maddie’s arm continues to bother her, her parents take her to a doctor who gives them a shocking diagnosis: the cause of the abnormal behavior of her limbs is a brain tumor and she must have surgery to remove it. She’s understandably afraid as he describes the procedure, but knows she must find a way to be brave and must face her fears–all of them–at the hospital, at home and at school.

She will need all of her courage not only to face her illness, but also to face Cassie at school. Both Cassie and Maddie are auditioning for the same role in the school play, but when Cassie accuses Maddie of lying about her tumor in order to get attention, Cassie’s bossiness turns into bullying.

It will take all of Maddie’s vibrant imagination, a lot of kindness-both given and received-and of course, the perfect mustache to overcome the tough stuff ahead of her.

Available wherever great books are sold in print and ebook. 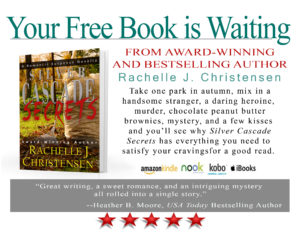